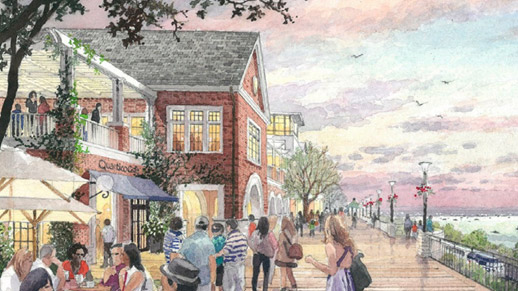 Plans to bring a hotel and shopping center to a massive planned community near Dumfries are finally moving ahead, in tandem with an effort to add a new Virginia Railway Express station to the area.

The Prince William Board of County Supervisors unanimously approved special use permits tied to new construction at the Potomac Shores development Tuesday, teeing up construction work on close to 3.7 million square feet of commercial space across the 1,920-acre property.

Irvine, California-based SunCal has been crafting the mixed-use development for years, breaking ground on some homes there in 2014. It’s planning to build more than 3,800 single-family homes and townhomes across the property, which is located along the banks of the Potomac River, with about a quarter already completed.

The development is centered around a Jack Nicklaus-branded golf course, but other elements included in SunCal’s plans have taken substantially longer to come online. The developer envisions a full town center with office and retail for the eastern half of the property, along a “riverwalk,” all anchored by a new VRE station.

Supervisors enthusiastically approved the construction of the commercial section this week, hailing it as a much-needed addition to the community, which is currently a bit remote from the rest of the area’s retail offerings.

SunCal will now move ahead with the process of finding an operator for the hotel, offering up a build-to-suit development opportunity. The developer has expressed a desire for a “five-star resort and conference center,” but it is leaving its options open should it not find any takers — the county is giving the developer three years to find a hotel partner, then it will have the ability to swap in other commercial uses for the property if it’s unsuccessful.

According to documents prepared for supervisors, that three-year clock will only start once SunCal has the permission to move ahead with its construction of the VRE station and its associated 550-space parking garage. That element has perhaps been the trickiest one for the developer to sort out.

SunCal is taking the lead on the construction of the station itself. But VRE and CSX, the freight rail company that shares tracks with the commuter rail service, have responsibility for the thorny web of infrastructure work necessary to connect the new station to the rest of the rail network. CSX owns the tracks.

When SunCal broke ground on the project, it pitched a 2017 opening date for the station. But that date came and went. The developer was forced to push back a projected opening for the station several times, angering residents who bought into the development with the promise that it would be accessible to mass transit.

Pete Dolan, a land-use attorney with Walsh Colucci Lubeley & Walsh PC, representing SunCal, assured the board that a 2021 opening date was realistic for the station. Previous reports suggested early 2022.

Supervisors said they’re eager to see the station open as soon as possible, considering its potential to make the commercial uses they just approved much more viable.