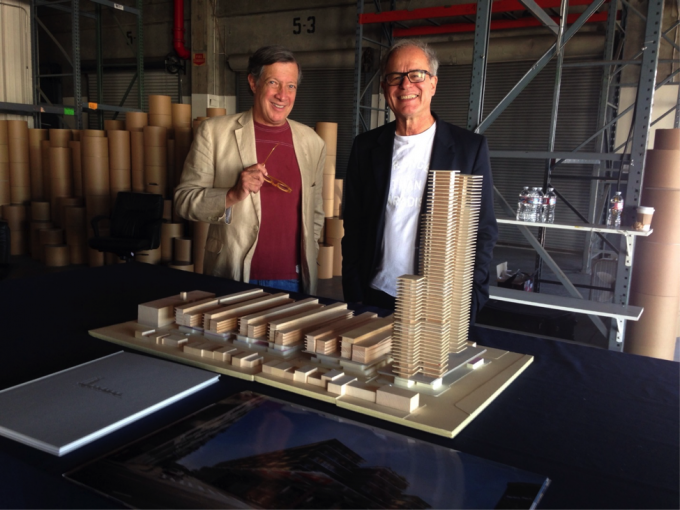 Dan Rosenfeld, left, a developer working with SunCal, and the architect Pierre de Neuron behind a model of the proposed 6AM development (photo: Frances Anderton).

Go to 6th and Alameda in the Arts District in LA and you will find streets with names like Warehouse Street, Merchant Street, Produce Street and Industrial Street.

But if the City of Los Angeles approves 6AM, a vast mixed-use residential project proposed by the development company SunCal, this onetime industrial area in downtown could be transformed far beyond the scale achieved by warehouse conversions to date.

And it proposes to do so in style — with the stamp of famed Swiss architecture firm Herzog & de Meuron.

6AM, whose name derives from its location, along 6th Street between Alameda and Mill streets, proposes to replace two large warehouses with a mix of low and high-rise structures in which a community of thousands will live, work, play and shop, on a site the size of 11 football fields.

It proposes a model for mixed-use, dense development in a region defined by separation of uses. 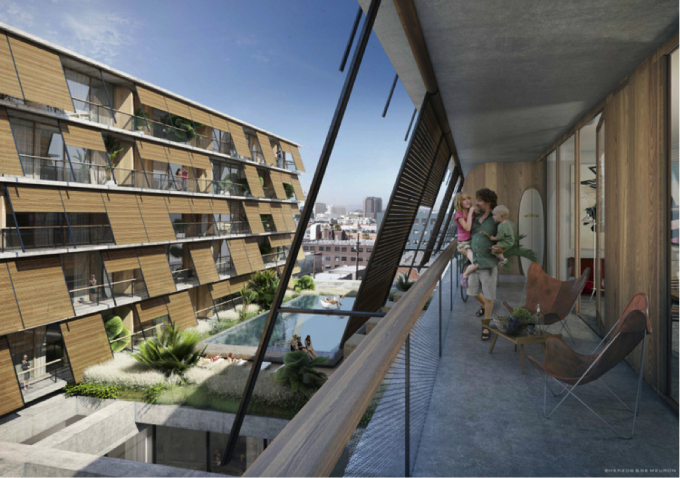 “Modernism told us to separate the functions,” says Pierre de Neuron on this DnA broadcast, “and LA is… one of the best results of this modern thinking. And now in the 21st century I think we have to think of other models… that are not only car-centric.”

It represents an ambitious next step for the district that’s already gone through some changes, says developer Dan Rosenfeld, who is working with SunCal on the project.

“The Arts District is a former industrial area developed by the railroads for business distribution and logistics on land that was once agricultural. Now it is the focus of a great deal of interest because people are attracted to the creativity and the authenticity of these industrial buildings and the grittiness and the character, the materials and the durability that they express. We can’t turn back the clock to what it was in its industrial days. . . so the challenge for us as a city. . . is to think about is where do we want to go.” 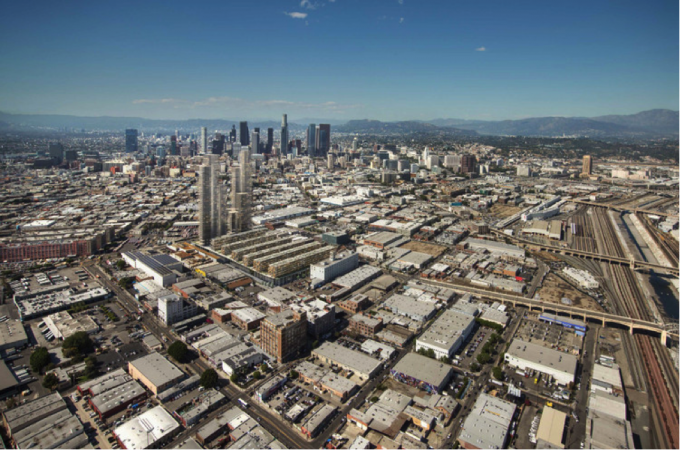 Aerial view of proposed 6AM project, showing towers on the Western flank of the site (rendering courtesy Herzog & de Meuron.)

Herzog & de Neuron (listed as design consultants on 6AM, and teamed with LA architectural firm AC Martin) plan to make a statement, as they have done in so many of their projects, from their early Dominus Winery in Napa Valley to their iconic Bird’s Nest for the Beijing Olympics (designed with artist Ai Weiwei) and, most recently, their Tate Modern extension.

6AM consists of two parts: a concrete “table” covering most of the site forms the base for several rows of four-story “bars” or “fingers” containing dwellings that open onto decks on concrete slabs. Under the table, at street level, are three floors of are shops, offices, small parks and perhaps even a school. The renderings suggest a blend of industrial chic (the simple concrete structure, a metal external frame supporting movable shutters and artful graffiti) and a buzzing Mediterranean marketplace.

Then, on the West edge of the site they’ve parked two 58-story residential towers. The design team refers to them as needles, on account of their intended thinness, and argues that putting the highest density on this flank makes sense because Alameda is the main artery and it is where the future Metro light rail stop will be. 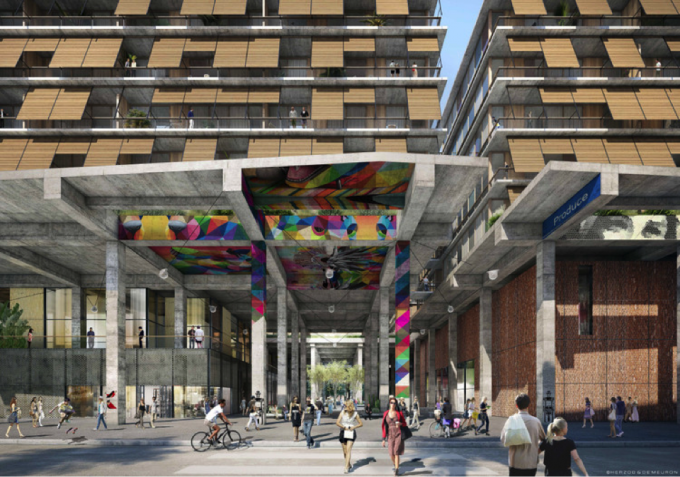 Entry to the “Market Yard” area of 6AM (rendering courtesy Herzog & de Meuron.)

The towers are made up of several attached towers of different heights, to break up the monolith and assure that they do not form, says de Meuron, “a wall along Alameda.”

But on looking at the model and renderings, of course one wonders about the towers. Despite the architect’s assertion that they will be “open and filigree”, how will they not block sunset views for the residents on the “table” to their east? And why the extreme jump in scale from the low-rise table to the skyscrapers?

De Meuron explains the design harnesses what he sees as the “DNA” of LA: either low-rise or very high — not in between.

“The high rise for us is important to make a difference between the low and the high because I think this is a part of specificity of Los Angeles. It’s either flat or it’s high. You don’t have in between bulky buildings. So (we’d) rather do extremely low and then you go higher. [The towers are] needle like — it shows something important is happening. So it’s showing that here in the art district, I raise my finger and I say here, that’s something. This is a part of LA, like downtown does or Korea(town) does.” 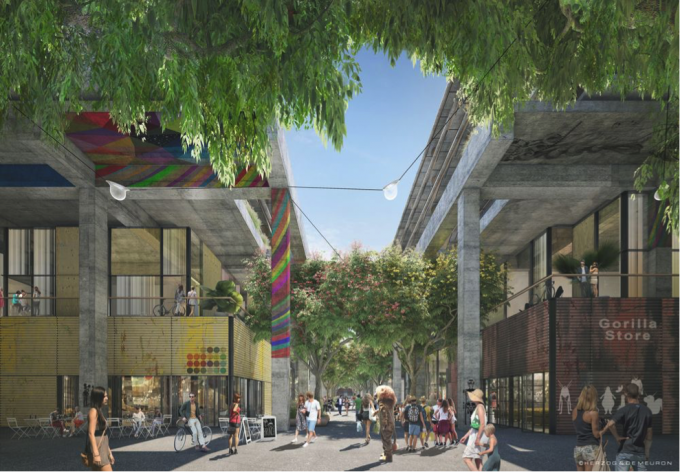 As the architects see it, the 6th/Alameda intersection represents another point on that line.

However, when asked if this means they want their towers to prompt an explosion of economic development in the area, and a cluster of towers jostling for attention with his “needles,” de Meuron gave an emphatic no, saying that his towers function as a kind of acupuncture for the area, giving it a jolt of energy.

The renderings, at least of the low-rise part of the development, are extremely seductive but some ask if the project can happen as conceived. On one hand, will it withstand the inevitable resistance to its height and density by Angelenos who want to slow growth in LA, not intensify it?

To this Dan Rosenfeld suggests that high density development should be concentrated in downtown, what he refers to as the region’s “commons,” thereby relieving pressure on other cities and neighborhoods in the region. 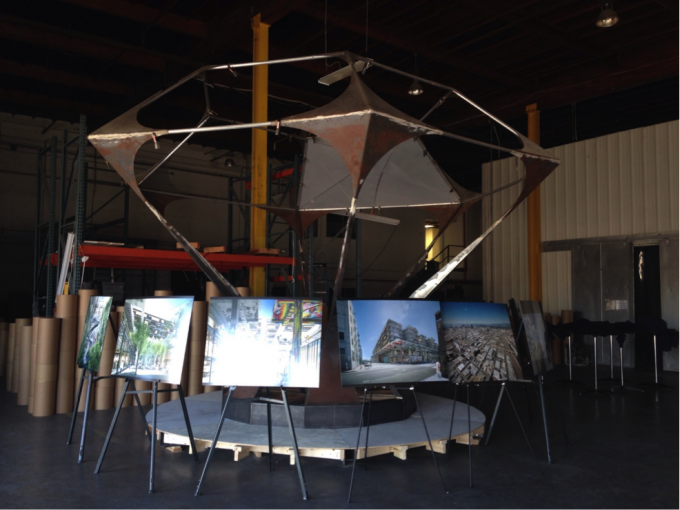 Renderings of 6AM on display in the alameda/6th warehouse (photo: Frances Anderton)

And will SunCal stick with the high caliber design of Herzog & de Meuron?

The Irvine-based company is a longtime developer of suburban master-planned communities as well as a flipper of land to homebuilding companies.

In recent years it has moved, like many developers, into infill development, and a few years ago the company proposed an innovative tower for Century City with a vertical garden designed by French architect Jean Nouvel. But that fell apart in the ‘08 recession.

De Meuron insists that the architects’ “goal and passion is to make this as refined in terms of architectural quality as possible which doesn’t mean it will be expensive.”

Dan Rosenfeld adds, “The process now starts with a period of public engagement, so in some sense the answer rests with the city and with the community, and the question here is, do we have the courage to take the next step as a metropolis. This is a crossroads and this project puts a spotlight on what we could be. And we have to say, is it what we want?”